How a "double eagle" in 1933 became the most expensive coin in the world? Interrupted flight 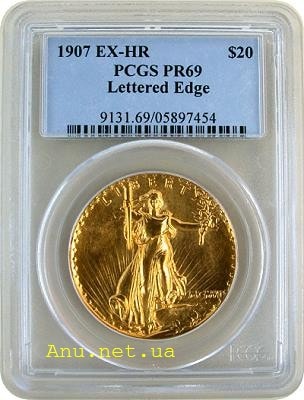 For the inexperienced in numismatics people value coins in the first place, determined by its age. In fact, much more complicated. How do you explain that the most expensive coin in the history of mankind today is the "double eagle" in 1933 coinage – a gold coin worth $ 20?

According to the collectors "double eagle" model of 1907 designed by Augustus Saint-Gaudens is not just a work of art and a true masterpiece. But why is it that, out of many thousands of coins minted by the American Treasury, the most expensive is recognized as the only one which, strictly speaking, even for money could be considered a stretch?

Gold money appeared in the US in the mid-nineteenth century. At that time gold in the United States enough, and a full-fledged dollar quickly became a benchmark of stability. At the request of Congress on all U.S. minted gold eagle. First saw the light coin in denomination of $ 10, which "eagle" was called.

A monthly income of ten dollars in those years could not boast of every American. The smaller coin denominations of 5 and $ 2.5 received the name of, respectively, half and a quarter of the "eagle." Of course, released into circulation in 1850, dvadtsatimetrovy called "double eagle."

The Golden eagles flew to America until 1933. Over time, due to inflation and economic hardship, their flight had to be interrupted. The majority of the population has virtually stopped the use of expensive coins as a medium of exchange, the Americans hoarding gold "in reserve" buying a heavy yellow circles are much more expensive than face value.

In 1933, President Franklin Roosevelt issued an historic decree No. 6102, effectively putting gold money illegal. They ought to compulsorily redeem at par on banknotes or gold coins, the accumulation and possession of gold eagles of all denominations was declared a crime punishable by a heavy fine and even imprisonment for up to 10 years.

The decree appeared quite suddenly, making a confusion in a planned and unhurried work of the Treasury for the minting of gold coins. In the 33rd, they managed to stamp 40 thousand pieces, but the appeal was not released. Unnecessary anyone else thousands of "double eagles" have decided to melt into ingots, which he did all the paperwork necessary.

As it turned out, the Treasury was the official who agreed with the President and immediate superiors. Chief clerk of the mint George Meccano came up with the prophetic idea that a failed circulation in the future will be able to bring serious wealth, if you save from destruction a limited number of coins. The idea was a success, and several "double eagles" disappeared.

At least so it seemed at first the criminal and his accomplices. As it turned out – just a thought. Certainly in the vast country, the idea of hoarding gold to bypass the presidential decree did not come in a "light head". The security services mobilized by the government, "dug the earth" in an effort to identify the attackers, intending to "enter Paradise on the backs". For seven years the vigilant American security officers – FBI agents have tracked, found and seized nearly all the coins stolen Maccana.