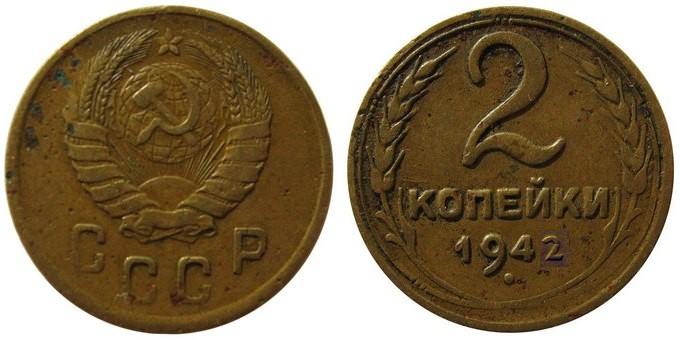 During the great Patriotic war in the USSR, the economy was in a very difficult position, and this could not affect the production of coins. Leningrad mint were evacuated in the city of Krasnokamensk TRANS-Baikal region. Absent high-quality metal, didn't have a good equipment, in addition, there was a great shortage of staff as most employees were drafted into the army. However, money was minted, but with the big restrictions, and some denominations of coins had not been produced.

In 1941, the release into circulation of money began in October, the circulation was very small and the majority coin just been issued, so all coins of the Soviet Union this year are rare. Actually a one-bit coins in 1942-1944 was not minted at all, but two pennies 1942 have a rather interesting history. There is documentary evidence that a tiny edition of 450 of these coins were produced in the besieged Leningrad, but up to the present day no instance is preserved. Experts suggest that these coins were used in the manufacture of improvised lighters.

Periodically on online auction sites receive proposals for the sale of 2 cents in 1942, however, in the official catalogs this coin is not listed, so hope that this is the original – it is doubtful. The price of such a coin rolls over, reaching up to one million rubles. Resources for the sale of numismatic values on the Internet is enough, but if you make an online purchase, the only proven and reliable sites. One of these is the online auction of Antiques Violite", where you can verify the authenticity of the lots offered, contact a qualified technician.